What a treat my family had this morning!  You are just not going to believe how incredible these Gluten Free Cinnamon Rolls are.  The first time I made them, I did my happy jump-n-clap-I-can't-believe-it's-gluten-free-dance...and I did it again this morning.  I mmmed and yummed my way through every bite of this deliciously moist and gooey cinnamon bun.  I think my family got sick of hearing me say how good it was!


It's funny how becoming gluten intolerant has driven me to make things I wouldn't normally make, so I could still eat my favorite treats and not feel left out.  Although I baked a lot, and loved it, if I could make something that wasn't from scratch and still tasted good, I would.  Therefore all my cinnamon rolls in the past came from a nice convenient can.  These homemade Gluten Free Cinnamon Rolls beat a can any day.  Boy was I missing out (and the funny thing is, you would think I would be missing out now since I'm gluten intolerant).  I was thinking that maybe a lot of you have your cinnamon rolls from a can too and might feel intimidated to make these Gluten Free Cinnamon Rolls on your own, so I have included step-by-step pictures for making these amazing treats.  I hope all the pics help instead of irritate you to have to scroll through it all!

Put on a pot of coffee, because you are going to want a cup to go with these cinnamon rolls.  Now get to baking! 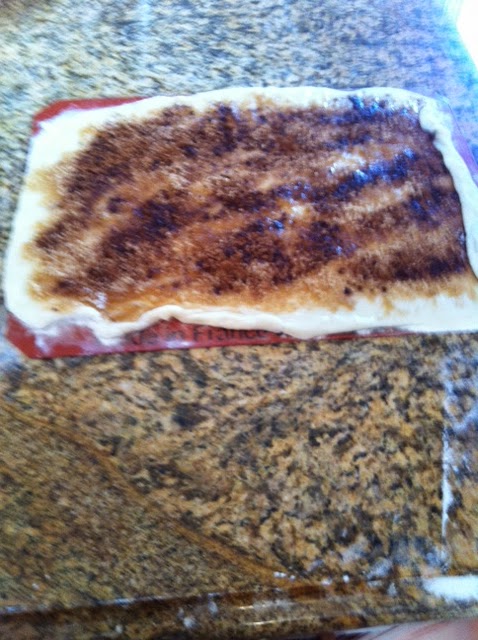 Here is the rolled out dough covered with the melted butter, sugar and cinnamon. Make sure your space is well floured with a gluten free flour so you can easily roll it up. You can see on the short, right edge I have started to roll it up. 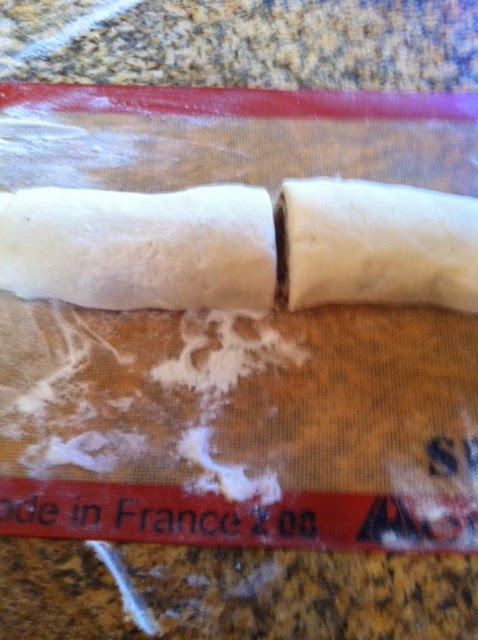 After is is rolled, you will cut the roll in half. 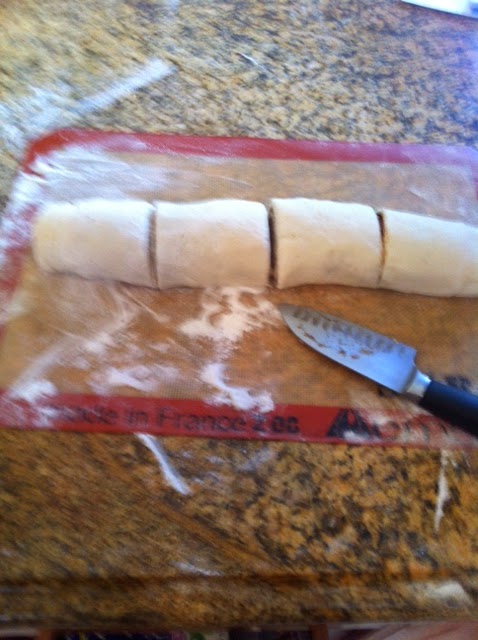 You will then cut the two halves in half. 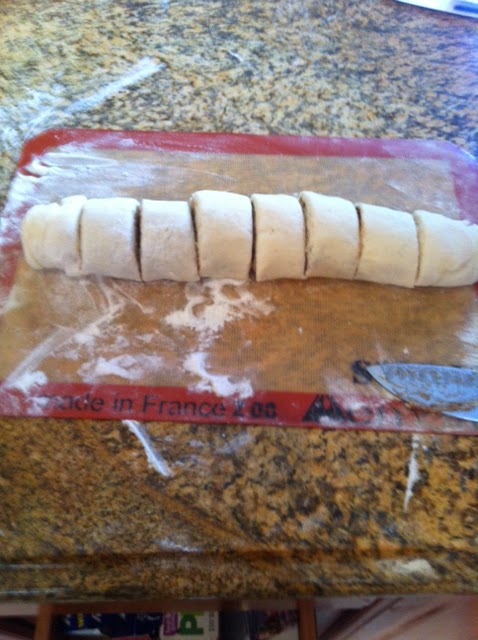 Finally, you will cut each cut log in half, making eight separate rolls. 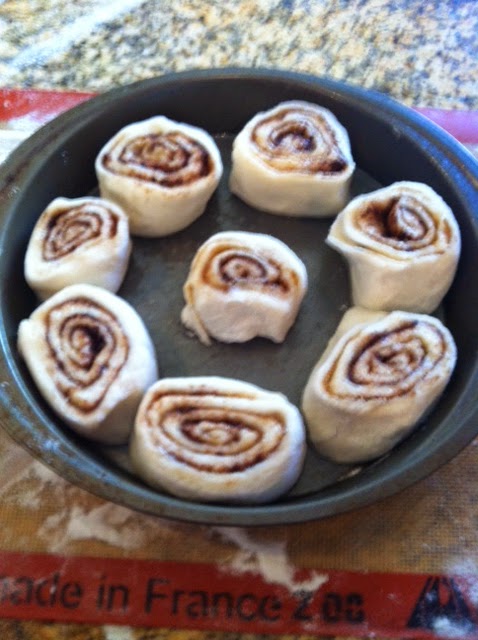 Put the cut sides down in a greased 9-inch cake pan, spaced as shown.  Cover with a dish towel and let them slightly rise by the warming oven for about 15 minutes.  You will not see much difference in looks at this point. 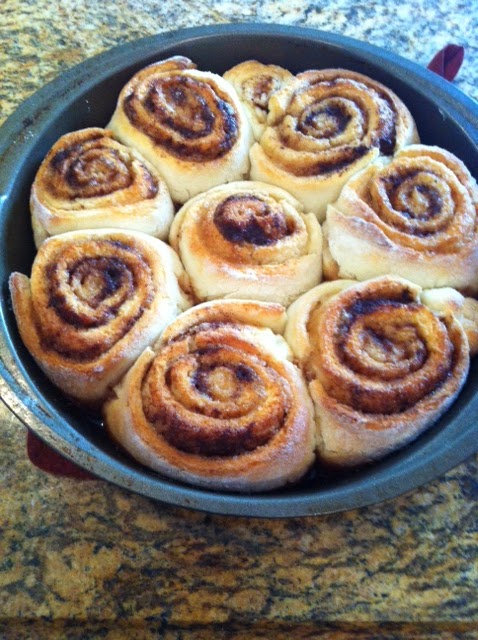 Look at those babies hot out of the oven.  They puff up and rise while cooking and meet up, snuggled all nice and close together.  See all the brown sugar and cinnamon on top?  Yumm! 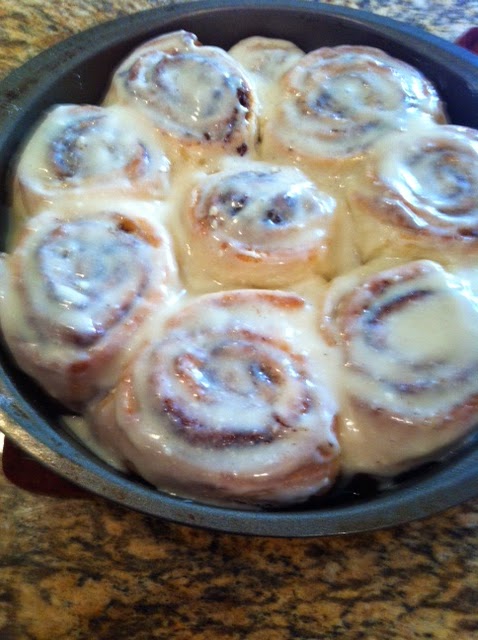 Here is the final product iced right out of the oven and ready to eat, all warm and gooey!

For the dough, stir yeast into warm milk with a pinch of sugar and set aside to proof.  In a large bowl, stir flour, sugar, baking powder, baking soda and salt together until combined.  Cut cold butter into dry ingredients until butter pieces are very small (the size of small peas).  Pour in warm milk mixture and stir until dough comes together.  Pour dough out onto floured work surface.  Roll dough out to be a 16 x 11 (approximately) inch rectangle.  Spread melted butter over top of dough and sprinkle with brown sugar and cinnamon.  Roll up gently but tightly, starting at short end.  Cut off uneven ends.  Cut roll into 2, then cut those two in half, to make 4, then cut all those in half to make 8.  Each roll should be about 1/2 - 2 inches.  Place rolls into greased 9-inch cake pan, starting around the edge of the pan. Place the rolls cut side down (they will almost be touching, except for the one in the middle), and ending with last piece in the middle (I even fit the little cut off pieces in there somewhere).  Cover with a clean kitchen towel, and set pan on top of oven to rise slightly for approximately 15-20 minutes.  Remove towel and bake 15-20 minutes until rolls have grown and the tops have browned.

For the frosting, place all ingredients into a large bowl and whip until smooth.  Spread frosting over warm rolls and serve!
Posted by Goodies Gone Gluten Free at 2:06 PM

Email ThisBlogThis!Share to TwitterShare to FacebookShare to Pinterest
Labels: Breads