We often have quiche as our family dinner.   Since I have had to eat gluten free, I often leave out the crust of the quiche, as I don't feel like making it (before being gluten intolerant, I would just buy the ready made crust you roll out and bake).  This Gluten Free Spinach, Bacon and Mushroom Quiche is crustless and oh so tasty.  The edges still get a bit crispy when cooked, so I actually don't miss the crust at all.  My daughter said she likes it even better without it...so there you go!  It was even better warmed up the next day.

When my son was young, he wasn't a fan of vegetables (and that's putting it lightly).  I would make a spinach and bacon quiche and call it "green quiche" instead of spinach quiche so he wouldn't know there was vegetables in it.  He ate and loved it...so it worked!  I don't have to hide the fact that there are veggies in the quiche anymore, even though he is still not a big fan of veggies he does love this quiche.  We like to put a little dollop of sour cream on top, just because.

Preheat oven to 375 degrees F.  Thaw and squeeze water out of spinach and set aside.  Saute onions and mushrooms in a tablespoon of olive oil.  Sprinkle with a pinch of salt and pepper.  Whisk eggs in a medium size bowl with Half and Half.  Stir in spinach, cheese, cooked bacon, sauteed vegetables, salt and pepper.  Pour into a greased 9 inch pie plate and cook in preheated oven for 25-30 minutes or until quiche is set and slightly browned.  It should be puffed up and not jiggly.  Slice and serve.  Top with sour cream if desired. 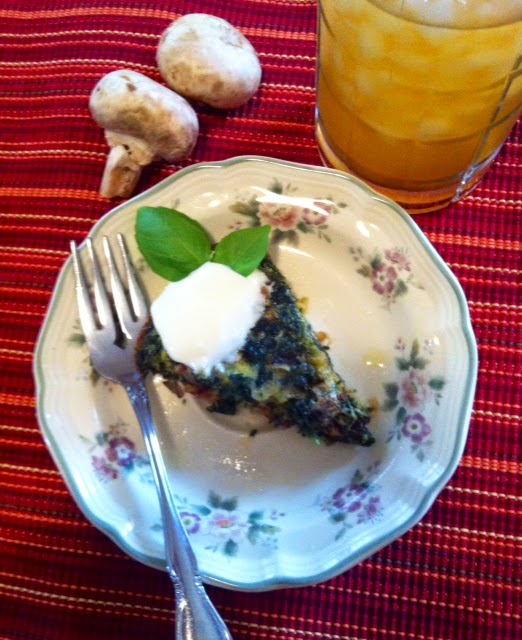